‘Maggie’ supporters and Chooks played by the Company.

“David Wood and Joy Millar are hilarious as the bickering busybodies 3LO and 3AR …    Allan McFadden’s music captures the bush ethos perfectly at times. But it is Vic Rooney as Siggie who delivers a bravura performance encompassing both vulgarity and profundity, like the clowns of classic tragedy.”

“Allan McFadden’s music is surprising in that it avoids what might have been a predictable folksy style yet is not at odds with the sentiment of the whole, performed by piano and violin and a couple of guitars. It is also quite diverse, ranging from the catchy Up the Maggies! footy song to the slow, haunting theme song, She Oak Creek, a nostalgia filled ensemble piece sung at the beginning and end.” 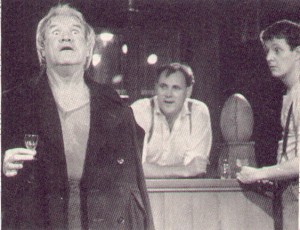 “Allan McFadden is one of the great composers of the Australian musical theatre. That is shown triumphantly, by his score for the musical The Last Wake At She Oak Creek.  … has produced a score with amazing variety, from the anthem-like poignancy of She Oak Creek to the jollity of a football cheer squad song, Up The Maggies! and the 1944s swing of Knights of the Highway.  ..  designer Brian Nickless’s set is a masterpiece of artiface; a simple platform which is shown to have many surprises beneath its deck, including a creek with running water!” 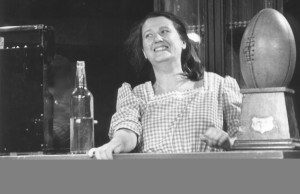 “The Last wake is a rollicking, rustic comedy … it is wonderfully entertaining … all of it is funny … There are some memorable performances. The most notable is Biggins as young Chookie.”

“Like a warm patch of sunshine, The Last Wake at She Oak Creek is a wonderfully cheerful moment in a somewhat dull winter season of theatre. Here’s an Australian musical which is original, well-scripted, well-performed and, most importantly, extremely enjoyable. With great wit and lively music  … it’s performed by a small band of nine energetic players who undergo the most amazingly quick costume changes to portray 21 characters, dogs, chickens, roosters, and cows … its plot and humour are severely rustic in origins … fine enthusiastic acting from the cast who are all very good, but I found David Wood, Vic Rooney, Joanathan Biggins and Julie Hudspeth were outstanding.”

“And now for something completely different – all singing, all dancing chooks, football fever, excessive drink, missing cadavers, rude rustics and shotgun wedding – all the things one inevitably associates with a wake. This extraordinary tapestry of Australian life is found in The Last Wake at She Oak Creek. It’s like a cheeky seaside postcard come to life, a funny version of Benny Hill meets Dad and Dave, a panto for adults who are not too silly to be a bit childish. It’s a packed show. Jokes – old, new, loved, neglected ones – bizarre songs, a mob of highly idiosyncratic hayseeds and, out of the weird mixture, a curious longing for the fact and fiction of She Oak Creek … There’s a highly engaging, very hard working and talented cast; and terrific design from Brian Nickless. Director Aarne Neeme stitches the lunacy together with understanding of atmosphere and idiom. 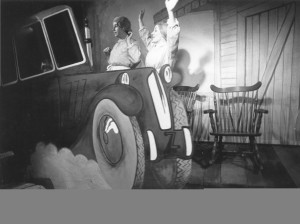 “The Last Wake is a musical, too, with a mostly catchy, sometimes amusing, but unsophisticated score by Allan McFadden. Indeed, the score’s lack of sophistication is a virtue, given the propensity of Australian musical-theatre writers to imitate Stephen Sondheim. Badly. Moreover it’s a score that is in keeping with the subject matter of the play … Director Aarne Neeme has resisted the temptation to play the piece too broadly, or to over-sentimentalize it. Instead he has struck the right balance between the two giving us an entertaining (if at times overlong) evening in the theatre.” 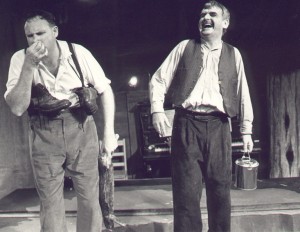 “The Last Wake is a musical play that I am sure will be performed and re-performed across Australia, from amateur productions in small country halls to the capital city theatres. Its humour is of the age of innocence … it as Australian as billabongs and gum tress and as country as slip rails on the dairy.   … my surrender was complete. In the end this is a charming and disarming theatre piece that draws laughter from situation and character rather than fancy dialogue. Like a bush dance, it is simply having fun … the cast performs with infectious energy and McFadden has provided a nice score to the musical numbers, including an hilarious chook ballet.” 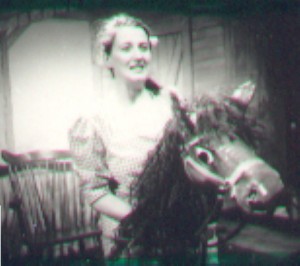 “Better hurry … one of the loveliest shows of the year, Last Wake at She Oak Creek, ends at The Stables this week. Any chance of it coming back in a bigger venue? One would like to think so because this musical must rank high among indigenous productions. It’s as Australian as, well, as Holden cars and meat pies, but a sight more fun.” 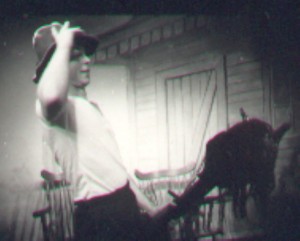 Other productions of: The Last Wake at She Oak Creek